Of Malcolm, Magic, & John and a Visit to a Community Garden

Last night I checked my work e-mail before I went to bed and I drowsily stumbled upon a message sent by my friend Malcolm in L.A.   Malcolm and I lived in the same dorm at Notre Dame, where he was a couple years behind me and a member of the football team. He is now a banking vice-president with his wife, who he met at ND, and two kids.

His e-mail was completely out of the blue in that it wasn't about our Irish's big matchup this Saturday vs. USC or anything about sports, except to say that his son really likes baseball and therefore was intrigued by my job.

The gist, though, was this: apparently on a quiet night in his household, Malcolm and his children, both under ten years of age, were clicking through his friends' various Facebook pages. When for whatever reason they reached mine - probably because I post more than Mark Zuckerberg himself - the kids started asking questions. I presume about my arms, though Malc didn't say that. They then told him that I "probably have a lot of friends".

According to the e-mail, his son said something to the effect of, 'because he is smiling and in his pictures all his friends are smiling with him. That makes people want to be around him.'

For Malcolm, this was liberating. He actually called it "one of my proudest moments of parenting." I am guessing he has tried to tell his kids that how they treat others will be how others treat them. And boys, instinctively, kind of go the other way in that they try to be big and bad. When his children saw that I try to treat people well and am indeed blessed with many friends, something registered.

Well, I wrote him back the next morning, thanking him for sharing all that with me. But there were two things I wanted to elaborate upon as well. The first was that my happiness, my joy, my peace, stems from my faith. My relationship with God helps me to appreciate the good times and endure the bad. I can't take credit for being joyful unless someone knows why I'm that way.

The second is on my desk sits a picture of me with Hall of Fame basketball player Earvin "Magic" Johnson. I keep it on there not because he's a legendary Laker. But because when I was a kid I wanted to be tough like Malcolm's son's peers probably do. There's nothing wrong with being tough and standing up for yourself. But in everyday life, Magic was unafraid to just be happy, smiling, carefree, and good to others. It was refreshing in a world of spoiled and surly athletes. So I took a cue from that growing up because I felt like my nature was closer to Magic Man's rather than cocky Larry Bird or even - as much as I love him - trash-talking Michael Jordan. People responded when Magic smiled and laughed so I figured I'd try the same. Somehow they listened to me too.

So THAT, I told Malcolm, is why I'm known as a pretty happy person who loves people and is blessed to have people give love back.

I say all this because it underscores a cool experience I had today. My friend Pedro and I toured the Olivewood Garden and Learning Center in National City, where they have a self-sustaining garden for community kids to keep and preserve. It was really cool and the centerpiece of this plot of land is a Victorian-style mansion formerly owned by the Waltons of Walmart fame.

Two of the Walton offspring wanted their young son to live in a normal neighborhood, not a secluded and ritzy one, so they lived here for many years. The house is now a museum and community center and the garden is a community entity and is next to the International Community Foundation, which funds many causes on both sides of the border. 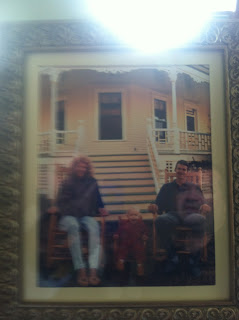 I bring all this up because Sam Walton wanted to make a difference in this world and that influenced his son John. That influenced John and his wife Christy into buying this house, smack dab in National City, for their son Lucas. The Waltons, in many ways, have positively impacted this country. 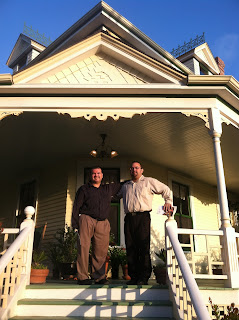 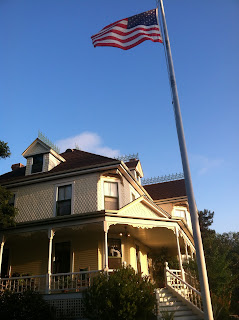 It's all about knowing who you are and not being afraid to make a difference. Magic did it with a smile, a basketball, and later a spirit to help inner-city entrepreneurs. The Waltons did it with an old house and a plot of land. People can make an impact simply by showing their true spirit.

Know who you are and don't be afraid to show it. That is the first step in really making a difference in this world.
Posted by Alex MOntoya at 12:12 AM